Start typing and press
Enter to search
Skip to content

In February of 2018, I sat in the office of the Director of Player Development for the Cleveland Indians, ready to share with him something that very few people knew: I was there to tell this man, our Farm Director, that I had depression.

In fact, much of my life to that point had been spent precariously navigating the various stages of depression and anxiety, from denial all the way to acceptance and back again (several times over). In the years leading up to that moment – from 2015 to 2017 — things had gotten particularly ugly.

It was in the spring of 2017, a year prior to that meeting, that I had accepted a job offer with the Indians as a Performance Coordinator. At 25 years old, this was, by most peoples’ standards, ahead of the curve. Whether that was the case or not, my career was certainly on a strong trajectory; meanwhile, my personal wellbeing was trending downward.

Still, that day in February of 2018 marked a highpoint on a year-long trek back up. Since joining the organization a year prior, I had worked hard to progress, and I had come a long way.

the final piece was full liberation: opening myself up to others so that I could truly be me.

That is how I ended up in our Farm Director’s office: I was seeking his approval to publicly share my story on mental health – both the struggles and the triumphs, and everything in between.

That moment of opening myself up took many weeks of deliberation. All the thought that went into exposing my vulnerability was challenging because I wasn’t exactly sure how my teammates, coworkers, and the greater sports landscape would perceive it. On the one hand, maybe it would all be taken respectfully; maybe I would find some support in this journey. But everything I thought I knew about sports led me to suspect otherwise.

The expectations in most sporting circles is that athletes must be mentally tough and surely, I assumed, anybody prescribing to this line of thinking would find depression to be a sorry excuse for mental weakness.

There was also the issue of timing: Spring Training had just descended upon us, along with a bright media spotlight. It’s not that I thought my story would cause a stir with any media outlets – quite the opposite, I did not expect any attention whatsoever. But I feared others might perceive it differently or misconstrue my intentions an attempt to “steal the show,” so to speak.

Ultimately, though, I gave my friends, colleagues, and humanity the benefit of the doubt. Our Farm Director’s initial support that day in his office was enough encouragement for me to take the wider leap of opening myself up to the world – for everyone to know who I really am.

So, I told my story in a series of tweets, then followed that up with an expanded version on my blog. I spoke of my decade-long struggles with depression, self-esteem, and body image issues.

At the time, I spoke conservatively. But now, in a much more transparent sense, what depression truly means to me, in my experiences, is finding it hard to shake the sense of existential loneliness and self-distaste, which lead to exercise dependence, food restrictions, and a steady avoidance of mirrors and photos (lending themselves to their own host of complications).

Where I also loosely generalized back then was in how I went about recovering – what I have done to get better. I spoke of leaning on my support systems and seeking professional help.

What this really entailed was calling home nearly every night and letting my family in on how I was feeling, no matter how ashamed I felt (I was absurd for feeling shame at all), and working my tail off (with the guidance of a psychologist) to fight the negative, self-deprecating thoughts that I encountered each day.

I also spoke of how positively my teammates and colleagues had impacted me in my journey with depression.

At that time, I also spoke of how positively my teammates and colleagues had impacted me in my journey with depression. I never told anybody that I was struggling, but people don’t need to know in order to help.

In so many instances my teammates made me feel comfortable because they always accepted me. At my worst, I would wake up each day feeling empty, alone, and in a fog-like state as I entered the office or weight room. Often, I felt like I couldn’t breathe, think or speak. Other times, I wanted nothing more than to hide under my desk. But, without having the slightest of a clue, our athletes and staff would pull me out of my daze, draw me out of my own despair and cast my attention back on the good in my life and in the world, on my mission to make a difference in sport and life.

What I did not know at the time of my “coming out” about mental health, was just how amazing these same people would be when they actually did know what I was going through. I got nothing – absolutely nothing – but support from players and staff, both past and present.

In fact, the outpouring of support beyond those that I knew was astonishing. I had been worried that some might find my vulnerability a sign of weakness, when in actuality countless people that I had never met would end up applauding it.

What’s more is that just as many people – both those I had been acquainted with and those I had not – began to share their struggles with me as well. I wasn’t just supported, I was illuminated to the fact that I am not alone in my fight, even in a sporting culture that has for so long been averse to such vulnerabilities.

The response I received upon sharing my story only further confirmed a belief I had long held (and shared on my blog during that time):

I firmly believe that shared vulnerability brings out the best in humanity.

Despite so many of our individual differences, we can all unite and rally behind one commonality: we are all susceptible to hardship. No matter our athleticism or physical prowess, we will all struggle. And for some, that struggle is with our own selves – our body image and self-worth, our perceived place in the world, our mental health. It isn’t just “okay” either, it is human.

We all want to be invincible on the court or field, but deep down, we are all human, and it is okay to be vulnerable. Whether you share your own story or not, you can take solace in the fact that you will always be accepted for who you are and what challenges you might face, and that you are never, ever alone. 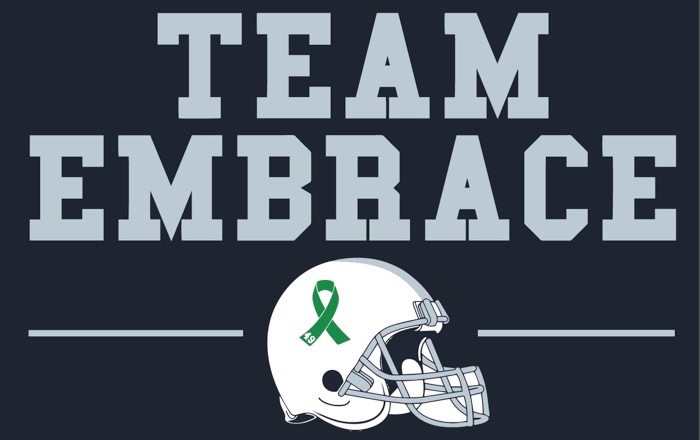